Superoxide Dismutase or SOD is an enzyme that has a metal-containing antioxidant. It reduces any harmful free radicals of Oxygen or O2 forming during a normal metabolic cell state that it will form oxygen or O2 and Hydrogen peroxide. Its name originated from dismutation which means simultaneous oxidation and reduction, with that being said Supeoxide Dismutase belongs to the enzyme class Oxido-reductases. To which this enzyme catalyzes an oxidation reaction and reduction reaction. Oxidation is a reaction that increases oxygen bonding and/or decreases hydrogen bonding, while reduction is a reaction that increases hydrogen bonding and/or decreases oxygen bonding. This enzyme can be found with all living cells, but for medicinal use the enzyme is extracted specifically from cows. It can be taken as a shot as a pain treatment and inflammation caused by Arthritis. It can also be used as a shot for tolerance of radiation therapy, improves rejection rates of kidney transplants and minimizes heart damage from heart attacks.(1)

The Cell wall not to be mistaken as the cell membrane is located outside the said cell membrane. It is described to be tough and rigid but flexible. It surrounds certain cells like: plants, fungi (like mushrooms), prokaryotes (like bacteria) and eukaryotes (like mammals). This acts as a support, protection and as a filter for unwanted foreign substances. The cell wall benefits from superoxide dismutase. Superoxide dismutase aids to the reproduction of yeast. The cell functions against cell wall-perturbation. Cell wall-perturbation is caused by oxidative stress and the superoxide dismutase aids as an antioxidant. This being said the yeast cell may be able to bud and reproduce due to the protection of superoxide dismutase. (2)

Supeoxide dismutase can be found in the dermis and the epidermis. It can also be found in a Siberian chaga mushroom or CHAGA for short. It is abundant of SOD antioxidants. Superoxide dismutase is associated with Copper (Cu), Zinc (Zn), Manganese (Mn) and Iron (Fe). It many cases this is a metabolic enzyme due to it being an antioxidant. (3)

Copper, Zinc Superoxide dismutase also known as superoxide dismutase 1 (SOD1) this enzyme is located within humans and is soluble. This structure displays that Cu,Zn Superoxide dismutase is embedded within this enzyme. This is located in the cytosol, nucleus, peroxisomes, and mitochondrial intermembrane space of eukaryotic cells and in the periplasmic space of bacteria. The enzyme within humans is described to have a 32-kDa homodimer, with 1 copper and 1 zinc binding site per 153-amino acid subunit. Each monomer based on a β-barrel motif and has 2 large functional loops, to which they are called electorstatic and zinc loops. This encases the metal binding region. The crystal structure of metal bound dimeric human SOD1. Copper and zinc ions are shown as blue and orange spheres. The zinc loop is seen in the orange coloured structure and the electrostatic loop in a blue colour. The intrasubunit disulfide bond is seen as red. A hydrogen bond network stabilizes the structure around the metal ions and links the metal-binding sites to portions of the protein (Fig. 1.). Metal binding region in SOD1 is contained within each subunit and has 1 copper and 1 zinc binding site in close enough to share an imidazolate ligand. (4) 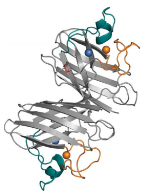 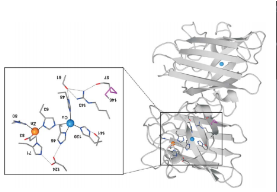 Figure 2 displays Iron, Manganese superoxide dismutase also known as superoxide dismutase 2(SOD2) this is located within humans. In this enzyme Fe,Mn- superoxide dismutase can be found embedded in this particular enzyme. This enzyme producess a mitochondrial protein to which it will form a homotetramere. It also binds 1 manganese ion per subunit. This protein binds with the superoxide byproducts of oxidative phosphorylation. it will convert it to hydrogen peroxide and diatomic oxygen. This enzyme can also be located within a bacteria E. coli. Crystal structures have been solved at high resolution for Fe,Mn- Superoxide dismutase. E. coli MnSOD described to have a homodimer, while in humans and T. thermophilus Fe,Mn- Superoxide dismutase are homotetramers. The subunits are composed of 2 domains, an all-a N-terminal domain and an a/b C-terminal domain (Fig. 2.). Known residues that only appear to be in Mn- Superoxide dismutase families, to which are expected to represent groups for catalytic function. Four of these are H26, H81, D167, and D171 in E. coli Mn-SOD sequence numbering. These are metal ligands. 2 more, H30 and Y34, form a gateway to an active site, and another, E170, is found in the outer sphere of a metal binding site.(5) 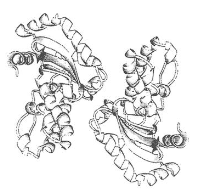 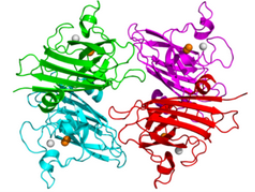 Mechanism of Catalysis, Kinetics of Reaction and Mode of Regulation

The overall reaction mechanism of superoxide dismutase is a ping- pong like reaction. It is because this reaction is reversible. As it displays in this formula:

This can be done by Fe, Mn and Cu,Zn-superoxide dismutases (SODs). Where Ezox and Ezred is Cu2+Zn2+ and Cu+Zn2+, Fe3+ and Fe2+, Mn3+ and Mn2+, Ni3+ and Ni2+ to which it is derived from Cu,Zn, Fe and Mn-SODs. This is a simple redox reaction. The display of oxidation and or reduction from oxidative stress and oxidative free radicals. That being said it reduces oxygen and increases hydrogen and vice versa. The first reaction displace an oxidation from the addition of oxygen and reduction of hydrogen. The 1st reaction gives enough energy to produce a 2nd reaction. To which the same process is done, but with the give product. Notice that the reaction displays the predicted outcome of superoxide dismutase to with both produced oxygen and hydrogen peroxide. This shows a stopped-flow kinetic measurements. The peroxide complex forms, it effectively inactivates the enzyme in a balanced state. This peroxide complex is described to be an isomer of the peroxy intermediate. It being formed when a turnover occurred, and the conversion of a dead-end complex demonstrates the solvent isotope effect less. This suggests that the proton transfer to productive peroxy anion complex prevented the formation of the dead-end complex. A close balance between oxidative and reductive rates is displayed to be quite important for an efficient cycle of the enzyme to which a turnover occurred. (Fig. 4.). (7) 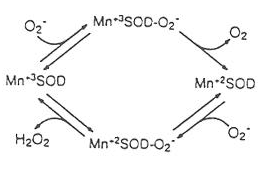 In the mechanism of superoxide dismutase catalyzed by copper dihistidine complex. An observation of the complex between superoxide and copper dihistidine wasn’t observed due to the dismutation if superoxide catalyzed by copper complex requires such a complex. Notably, amino acid residues which are located near the active site have an effect on the enzymatic dismutation. Derivatization of Arg-141 which is positioned only 6 A away from the copper ion, diminishes the activity of the enzyme approximately by 10% of its original value. Also 7 to 8 lysine residues diminishes the activity of the enzyme and also inverts the dependence of its activity in ionic strength. Amino acid residues near the active site play an important role in the Mechanism of superoxide dismutase. Lysine provides an attractive electrostatic field or superoxide anion. While the rest of the residues play a role in directing the superoxide anion to the active site. (8)

Super Oxide Dismutase is an enzyme present in all living cells. This enzyme speeds up a certain chemical reaction in our body. Super Oxide dismutase is usually extracted from cows. In can be taken by the mouth for removing wrinkles and for rebuilding or repairing tissues. Super Oxide dismutase can be also injected in our body. It is usually used in treating gout, sports injuries, osteoarthritis, cancer and lung problems for a newborn baby. It also helps in toleration with radiation therapy. It also helps in treating people with amyotrophic lateral sclerosis, Parkinson’s disease, Alzheimer’s disease and cataracts. Some researchers found that super oxide dismutase has a potential to be used as an anti-aging treatment. (9)

Lou Gehrig’s disease, a fatal degenerative condition in which motor neurons are destroyed, is now known to be caused by mutation in gene that codes for cytosolic Cu-Zn isozyme of SOD. Red blood cells are usually protected because they possess high concentrations of Cu-Zn SOD, catalase, and gluthathione peroxidase, and a very active pentose phosphate pathway. (10)