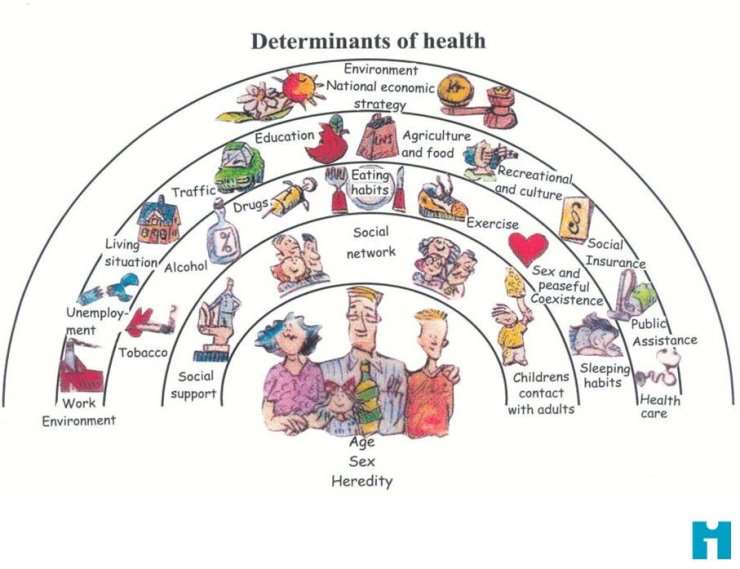 This essay will be looking at how an individual’s health is determined within society. Epidemiologists who study the pattern of disease, have found that not all groups have the same opportunities to achieve good health (Naidoo, 2009).

There are many factors that effect a person’s health such as where a person lives, the state of the environment in which they live, employment, income, education levels and relationships that person has with their family and friends. Using employment as an example. If a person is in employment they will receive an income, which can be used to fund food, a home and bills. Therefore they have shelter, heating and a decent chance of a steady healthy life. In comparison if a person is unemployed they would not receive an income to fund food, a home and bills. This would have a detrimental effect on their health, not only physically but also mentally. Financial worries and stress could easily cause mental health problems such as depression and the person would have low levels of self-esteem. They are also at risk of having to live in damp housing which could cause long term respiratory disease (Deaton, 2003).

This essay is going to have an in-depth look at how income and education effect the lifestyles of different levels of social class. It will then look how this determines the health of these groups in society. Statistical sources will be used as evidence to show how mortality rates are effected by high and low levels of income and education in England compared to America. The essay will finally be drawn to a conclusion, using all the information and statistical facts found throughout the writing of this piece of work.

An excellent introduction – good use of sources.

In the 1900’s the major causes of death were infectious diseases such as Tuberculosis and Influenza but with advances in science and improvements in medicine, deaths from these sort of diseases have been dramatically reduced. As infectious have been eliminated, other illnesses have replaced them as leading causes of early death in Western culture.

These kinds of diseases are most common amongst lower socioeconomic groups. It is the lifestyle that this group of society lead that causes these kind of diseases. Things like excessive drinking, smoking; low levels of physical activity and high levels of stress, depression and poor diet are all factors that contribute towards ill health (Naidoo, 2009).

Cardio vascular disease in England is amongst the highest in the world, being the cause of death in 40% of men and 38% of women (Mayes, 1991).

For a person to have good health and well-being they need to have access to fresh fruit and veg[i2] daily in order to eat well. Regular physical activity is essential for disease prevention and health promotion. Good fitness reduces the risk of chronic diseases such as heart disease. Good fitness also contributes to the mental well-being of an individual, making them feel good about themselves and improving their self-esteem and increasing energy levels. Fewer than 40% of adults meet physical activity guidelines and this generally declines with age (Mc Graw Hill, 2014).

People in higher social class groups live longer and enjoy better health than disadvantaged groups, for example a man in a professional job is likely to live seven years longer than a man in an unskilled or manual job. It would seem that if a man was unemployed the life expectancy would decline even further (Naidoo,2009).

The major inequality in social class is wealth, income and education. Many economists argue that better educated people live longer than poorer, less educated people. This is because with good education, comes good knowledge and understanding and stands well educated people in better positions to get higher paid jobs, bringing them good income and wealth. Meaning they can afford better things in life, like good fresh food and housing which in turn should lengthen their life expectancy.

A varied, healthy diet is essential in promoting good health. A person needs to eat to survive, food supplies energy for growth and movement, Protein for muscles and dietary fibre for roughage. A low intake of dietary fibre is suggested to be the cause of many diseases such as constipation, bowel cancer, coronary heart disease and varicose veins (Mayes, 1991).[LF3]

The type of housing a person lives in also has a massive impact on that person’s health. If someone lives in a damp free house, situated in an area of low pollution levels, they should have lesser chance of suffering from respiratory problems than someone who does live in damp conditions.

A person from a lower class group, that has no choice but to live in damp housing because of income is at risk of ill health. With damp housing comes all sorts of problems for an individual’s health. It can cause respiratory problems and infections, allergies and asthma, the environment can also affect the immune system (NHS, 2014).

More than one million children in England live in bad housing. Poor housing conditions increase the risk of severe ill health or disability by up to 25% during childhood and early adulthood. Respiratory problems such as coughing and wheezing, means losing sleep, restricted physical activity and missing school. Therefore growing up in poor housing can have a long term impact on a child’s life chances because of the effect it has on their learning and education, lower educational attainment, greater likelihood of unemployment and poverty (Harker, 2006).

It is thought that better educated people are more able to understand and use health information and are better placed to benefit from the healthcare system. The knowledge that the higher class people have learnt prevents them from partaking in risky behaviours like binge drinking and smoking, like the lower socioeconomic, less educated people do.[LF4]

Both education and income promote health in different ways, like stated before good education makes it easier to use new health information and technologies and income makes life easier for the individuals, reducing stress and worry financially. Not having to worry about child care costs and being able to go on relaxing family holidays, giving them a better quality of life and better state of mental health. Reducing stress levels is just as important as a healthy diet and exercise regime in reducing the risk of chronic heart disease and certain forms of cancer. Cities with higher average education or higher average income have lower mortality rates (Deaton, 2003).

Children born into well educated, high income households will also be given the best chance at a bright, healthy future. They will realise the importance of education and along with education comes power and the ability to earn a decent income. This is obviously not the case for children born into less educated poorer families. These children arrive at adulthood with poorer health and poorer educational attainment. This has a massive knock on effect to that individual’s ability to earn themselves a good income in adulthood. These individuals will also suffer high levels of stress and low levels of self-esteem which will have a negative effect on their mental health and well-being.

It is obvious at the end of this report that not everyone is given an equal chance at a healthy life. People do not get chronic diseases because they are unlucky; they get these diseases because of the lifestyle in which they lead. These people may not choose to lead these lifestyles; it can be because of reasons out of their control why they are in these situations. Lack of education and income can all impact upon their health and lifestyle.

A good education is the building block to a healthy life. Education increases a person’s chance of employability and ability to cope with many situations, allowing the person not to get overwhelmed with stress which could have a detrimental effect on their mental health.

Employment provides income and thus access to health promoting resources such as a variety of fresh fruit and vegetables, good housing and heating. People need to take education more importantly from an early age to increase the whole of society’s life expectancies and to close the gap between different social classes.

Very clear, decisive conclusion however it is important to consider factors such as a healthy balance between foods, drinks and exercise. Some people who exercise excessively when they are young will often suffer ill health later in life etc.

Deaton, A. (2003) ‘Health, Income and Inequality’ [Online] Available at: https://homeworkacetutors.com//write-my-paper/TheNationalBureauofeconmicresearch.com [Accessed – 12th May 2014]

GOV.UK. (no year) ‘Can damp and mould affect my health?’ [Online] Available at: https://homeworkacetutors.com//write-my-paper/nhs.co.uk [Accessed – 5th May 2014]

[i1]Should be discussion of findings

[LF3]Very good points of discussion and very good use of sources.

[LF4]I do agree however this could go the other way too – more money means you can afford to behave more riskily e.g., drug taking & alchol.