Oil and Non Oil Sectors of the GCC Economies

Qatar’s Diversification plans are for massive infrastructure development coupled with further diversification such as manufacturing, communication, construction, trade, real estate and business services. A proposed140 billion USD infrastructure building planwill be invested in the non-oil sector – in transport, health, education, tourism, sports and roads and bridges. This includes the construction of the Hamad International Airport and a USD 36 billion railway system for hosting the FIFA World Cup in 2020. The country also increased the budget spending for education, to 15 percent, following the transformation into a knowledge-based economy.

In the UAE the five per cent economic growth has come from hospitality and manufacturing, construction and real estate are also leading the growth story. Dubai’s tourism industry also particularly has been booming steadily in the last few years: Hotel occupancy rates soared upto 83.6 per cent in January 2014, coupled by the emirate’s record air passenger traffic, according to the latest reports of the MENA survey.

In the Kingdom of Saudi Arabia, government is planning diversification through power generation, natural gas exploration, also telecommunications, and petrochemicals. It has undertaken a multi-billion dollar strategy to build six Greenfield economic cities, a significant step towards its diversification agenda. The major concern however is Saudi Arabia’s over-dependency upon the expatriate workforce for most of its jobs. The government is recruiting its citizens through a mass drive besides spending on their job training and education.

Bahrain has been the regional pioneer of economic diversification. Initiatives over the decades for diversification have included downstream oil and offshore financial services, along with investments in human capital. To spearhead the process of diversification it offered low operating costs and enjoyed a reputation as the “Gateway to the Gulf”, with the best market access to the economies of the GCC. Bahrain also established financial services sector with more than four decades of experience.

Kuwait is the only country where contribution of most non-oil economic sectors declined post the Iraqi invasion in 1990, after hundreds of companies and foreign institutions, including banking and investment institutions, moved elsewhere in the region. Kuwait has not implemented any significant development projects of economic value, while its dependence on oil revenues has been increasing. (Asoomi, 2012) 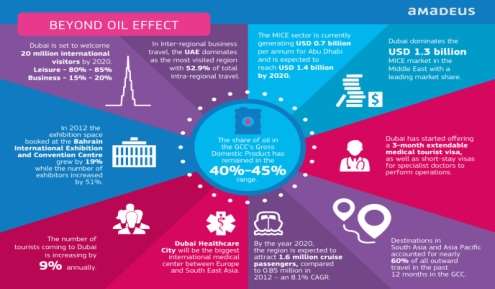 Non Oil Sector of the UAE

The UAE has made significant progress in its attempts of diversification to non oil sectors. One such remarkable performance can be seen in development of its tourism sector. The tourism sector’s success is boasted in its contribution to GDP which has gone up from just 1 percent 40 years ago, to about 10.4 percent at present. The sector’s relevance is expected to rise further in the coming decades given the existence of infrastructure that will contribute to the development of the sector on more levels than one. According to available data, about 50 million tourists have visited Dubai Shopping Festival (DSF) and have spent around 88 billion dirham’s since its inception. The number of tourists in Dubai has reached 1.1 million alone while it exceeded 2 million throughout the country. The numbers are significant considering the turmoil in the Euro zone as tourists from Western Europe constitute a large proportion of visitors to the UAE.

Rising tourist numbers has also injected fresh blood into the airports in the UAE. Arrivals at Abu Dhabi International Airport are projected to exceed 10 million for the first time. National airlines – such as Emirates Airlines, Etihad Airways and Air Arabia – have contributed a great deal to this significant progress as they linked the UAE to a large network of cities across the globe. Other important economic feature of the tourism sector include the link between the various facilities and services and their multiple activities, such as retail trade, internal transport, communications, restaurants, and services and public utilities. If the tourism sector continues at this pace for the next 10 years it will raise its share in the GDP to anticipated 12.1 percent. This is a large proportion that matches important sectors such as processing industries and financial services and will help the UAE become one of the three largest tourist destinations in the Middle East. (Al-Asoomi, 2011)

The UAE healthcare sector can be divided into two regions; Abu Dhabi on one side and Dubai with the Northern Emirates on the other. The UAE Healthcare Industry consists of key autonomous players such as the Ministry of Health, Dubai Health Authority, Abu Dhabi Health Authority, among others. A recent data recorded from key regulatory bodies and other health establishments revealed a total of 86 hospitals, 2,665 clinics and health centers, 12,752 physicians, 2,916 dentists and 9,592 bed spaces.( https://homeworkacetutors.com//write-my-paper/sanaesolutions.com/healthcare-market-uae/).In the past few years, the UAE healthcare industry has shown an unprecedented growth which is expected to continue in future due to increasing population, rising prevalence of lifestyle diseases and epidemic outbreaks like H1N1. The country has witnessed a tremendous increase in the demand for healthcare services and professionals, which is indicative of the high healthcare spending in recent years. As per latest estimates, the healthcare market of the UAE has expanded at a CAGR of over 16% during 2011-2014. (SANA, 2013)

UAE has been established as one of the top destinations for medical tourism. Many multi-national companies such as Saudi German Group and DM Healthcare have also put in place strategies to expand within the UAE healthcare market. New players, including Landmark Group, are expected to diversify into the healthcare market in coming years. Travelers across the globe seek cosmetic surgery in UAE for which it is well known. (SANA, 2013)

Recent years have seen extremely positive developments through numerous collaborations, strategic tie ups between healthcare stakeholders, understanding memorandum’s between public and private entities to enhance the healthcare industry. Expansion activities are in the offing by major hospitals while many new entrants are planning to foray into the market. The government has been creating viable atmosphere for health care stake holders, investors for the fast development of the health care system in the UAE. (SANA, 2013)

Ecssr.ac.ae, (2014). FeaturesÂ-ÂRole of Tourism in Diversification of the UAE Economy. [online] Available at: https://homeworkacetutors.com//write-my-paper/ecssr.ac.ae/ECSSR/print/ft.jsp?lang=en&ftId=/FeatureTopic/Mohammed_Al_Assoumi/FeatureTopic_1488.xml [Accessed 30 Sep. 2014].