Essay Question: What do you think about the prospect of a $5 fee to see a GP?

The topic of a $5 patient co-payment for GP visits is an ongoing debate that is currently being argued from individuals to health care providers. Under this proposal, pensioners and concession card holders are exempted, and families are allowed 12 bulk billed visits before co-payment applies. So, why would the government slug patients with a $5 co-payment for GP visits? The Australian Centre for Health Research (ACHR, 2013) claims that by implementing this proposal, the government would save an approximate $750 million over 4 years and that the co-payment proposal would:

However in order to take a stance, it is important to first understand Health. Should Health be a right, or is it a privilege? If Health is a privilege, health insurance would only support emergencies and not day-to-day healthcare maintenance, which would be detrimental to those in financial hardship (J L. Marshall, 2011). Hence, Health should be a right, a right “based on need and not the ability to pay”, where everyone can have equal accessibility and treatment to health care, which is why the $5 co-payment should not proceed (Public Health Association Australia, 2011).

So why does the government intend to cut expenses from the health sector through a co-payment? Are we spending too much? According to the Australian Institute of Health and Welfare – AIHW (2013), total health care expenditure in 2011-2012 amounted to $140.2 billion, which is 7.6% higher compared to the previous year (AIHW, 2013). Since GP visits are covered by Medicare, which is funded by the Government and through a levy, GP visits would be included in this $140.2 billion. However, it was reported that the total Medicare expenditure was $16.3 billion in 2010-2011, “total” meaning that it included GP visit along with various services covered by Medicare Benefits Schedule – MBS (Australian Government – Department of Human Resources, 2011). Thus, it is reasonable to consider that Medicare is only a small portion of the total expenditure.

According to The Organisation for Economic Co-operation and Development (OECD), Australia’s health expenditure stands at $3800 per person, which is 8.9% of the Gross Domestic Product – GDP. In comparison, USA’s health expenditure per capita was $8508 per person, or 17.7% of GDP. Does this perhaps mean that life expectancy in USA is better due to the extra cost to health care? This does not seem to be the case, but rather statistics demonstrates that the highly privatised health care system is inefficient as shown in Figure 1. 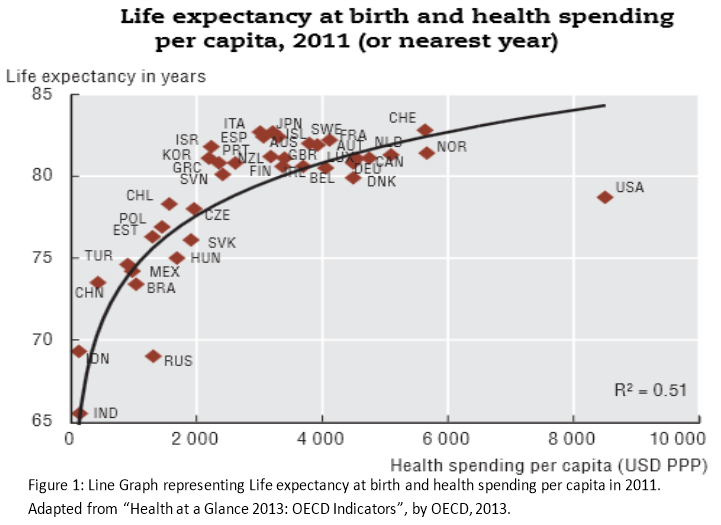 Given that a privatised system is evidently less efficient but yet costs more for individuals, would it then be wise to implement the co-payment, a move seen by many as a means to slowly “dismantle” Medicare (C King, 2014)? According to Catherine King (2014), the government would reduce expenditure for healthcare by means testing Medicare, but Australians will have to carry the tab. Means testing access to primary healthcare will lead to greater privatisation, which will restrict access to GPs for most Australians, more so on older people, the vulnerable ones in our population and families with children (C King, 2014). King (2014) states that “GPs are the cheapest within health systems, experts at diagnosis and able to detect potential health issues in their infancy”. Thus, if GPs are restricted, people would end up in hospitals, the expensive side of the health care system, increasing the expenditure rather than saving.

Besides the intention of cutting costs for health care, one of the reasons provided by the ACHR for the co-payment proposal was to reduce avoidable demand (over usage) of GP services. However, the solution to this issue would not be to introduce a $5 co-payment for GP visits, as there are concerns that the co-payment would “jeopardise equitable access to clinically appropriate healthcare” (J Swan, 2013). This can be explained with a few questions by considering the targeted audience and the effects of the solution:

According to J Swan’s article “John Glover voices fears GP fee will make poor suffer” (2013), Professor Glover, who led Australia’s most detailed analysis on the relationship between a person’s wealth and their willingness to visit a doctor, states that there is “very strong” evidence that poorer people are already under using healthcare in proportion to their level of illness. Through his analysis, it is shown that only 5% of residents who lives among Sydney’s wealthiest neighbourhoods – Mosman, Woollahra and Hunters Hill, claimed they had delayed medical consultation due to financial issues. In contrast to less wealthy areas, Penrith had 13.5%; Nambour 23.4% and Ballarat had 17.9% residents claiming they would delay visiting doctors due to cost.

From these statistics, it is clear that the poor would be most affected. John Glover, director of the public health information development unit at the University of Adelaide describes that the $5 co-payment for doctor visits would “discourage the wrong group of people from visiting the doctor while doing nothing to dissuade those who are already over using GP services” (J Swan, 2013). The co-payment would cause those likely to get seriously ill to unreasonably avoid preventative care which is a step towards reducing what we have as a universal healthcare system – privatisiation (J Swan, 2013).

Would the $5 co-payment disadvantage certain groups of people? The co-payment would have dangerous consequences for the poorest and sickest

This then comes down to the issue of cost and equity. Health Program director of Grattan Institute, Stephen Duckett states that “In the healthcare system there’s a trade-off between costs and equity, the government might save money in the short-term at the cost of equity, but Emergency departments would soon fill up with patients delaying to visit GPs” (J Swan, 2013).

In contrast it is well established that hospital admissions can be prevented by primary care. Australian data show that there are around 33 hospitalisations per 1000 people per year or 10% of hospitalisations could be prevented by effective primary care5. These primary care preventable hospital admissions are increasing in recent years. The ACHR report suggests that the introduction of a co-payment will reduce all GP attendances, both those regarded as necessary, and those that are perceived as unnecessary1. There are inadequate data to know how this will affect hospital admissions. However, the co-payment may increase rather than reduce overall government health expenditure.

I support the reasoning provided by ACHR for the introduction of co-payment to remind people that maintaining good health is an individual’s responsibility, which requires investments in comprehensive primary health care (Public Health Association Australia (2011). I also support the overall aim that health care expenditures must be properly managed, to ensure an accessible, equitable, safe, effective and efficient health service provision (Public Health Association Australia, 2011). However, introducing co-payments for GP visits is just one of many solutions available to reduce Health expenditures. Is it a good solution for the reasons provided by ACHR? In my opinion, I do not think it is a good solution. The co-payment would disadvantage the poor, ill and families with children greatly. It is an inefficient method not only to increase health care funding, but ineffective mechanism for reducing demand. The introduction of a co-payment for GP visits is a regressive move towards a privatised system. Given that a privatised system has been shown to be inefficient, “means testing and privatisation would only spell the end of Medicare and it’s not how the government should manage health expenditure” (C King, 2014). It is my belief that this proposal has been inadequately investigated and more research would reveal better options to constrain health expenditure while encouraging individual responsibility for health. If further investigation are to be carried out, I would strongly recommend the government look into the management of successful countries with universal health care system such as Canada; or they could make slight adjustments to the Medicare levy, which would help increase health funding as well.

Report: The cost of care

One in seven Australians has delayed seeking medical help because of cost, with Queenslanders more than twice as likely to find cost a barrier than people in NSW.

Increased Ambulatory Care Copayments and Hospitalizations among the Elderly